H.M. Queen Sirikit of Thailand has long been known for her immaculate sense of fashion, in addition to her achievements and contributions to the Nation’s development as the Queen of Thailand. In 1960, Her Majesty began collaborating with Pierre Balmain, the French haute couture designer and made Thai silk better known and more popular than ever to the world.

H.M. Queen Sirikit of Thailand commissioned Pierre Balmain, the French couturier to create her wardrobe for her state visits alongside H.M. King Bhumibol Adulyadej to fourteen European countries and the United States. Her Majesty’s royal wardrobe was a mix of Western style and Eastern tradition, using Thai silk for the creations of her daywear, casualwear and eveningwear.

Since then, Pierre Balmain together with Erik Mortensen, a designer of Danish nationality working under House of Balmain, began creating countless ensembles for the Queen of Thailand. In 1960, Her Majesty made the International Best Dressed List Hall of Fame with her unique royal wardrobe and elegance. Erik Mortensen had designed many iconic dresses for H.M. Queen Sirikit. Among these include the evening dress made of silk ikat (Mat Mii) with bead, sequins and crystals created in 1979, the brown Thai Boromphiman dress which was worn when Their Majesties presided over a religious ceremony at the Grand Palace on 5 December 1989 and  the purple black gown made of silk ikat from Buriram province of northeastern Thailand created in 1992, where Her Majesty wore the dress to a banquet to receive awards from UNICEF and UNIFEM in Bangkok.

According to the biography of Erik Mortensen written by Lone Bastholm in 2001, the connection between H.M. Queen Sirikit and the Danish designer was far more than the exquisite wardrobe. Mortensen was a person, whom Her Majesty could rely on and seek advice on how to appropriately adorn western outfits to each occasion in different countries, where he frequently accompanied her. As an artist and a designer, Mortensen had a profound understanding of the Thai silk tradition and craftsmanship and knew how to brilliantly combine it with the French haute couture, which enabled him to implement Her Majesty’s ideas into pioneering royal wardrobe. In turn, Mortensen admired H.M. Queen Sirikit for her beauty, elegance, graciousness and attractive mind.

H.M. Queen Sirikit continued to promote the traditional Thai textiles and revive interest in the traditional material at home through her wardrobe created by House of Balmain and Erik Mortensen. In 1976, Her Majesty established Foundation for the Promotion of Supplementary Occupation and Related Techniques (SUPPORT) to help rural families earn additional income from their silk production.

In 2016, to celebrate the birthday anniversary of H.M. Queen Sirikit of Thailand, the Queen Sirikit Museum of Textiles (QSMT) organized an exhibition “Fit For A Queen” displaying more than 30 Thai silk dresses designed by House of Balmain, with masterpieces by Erik Mortensen included. 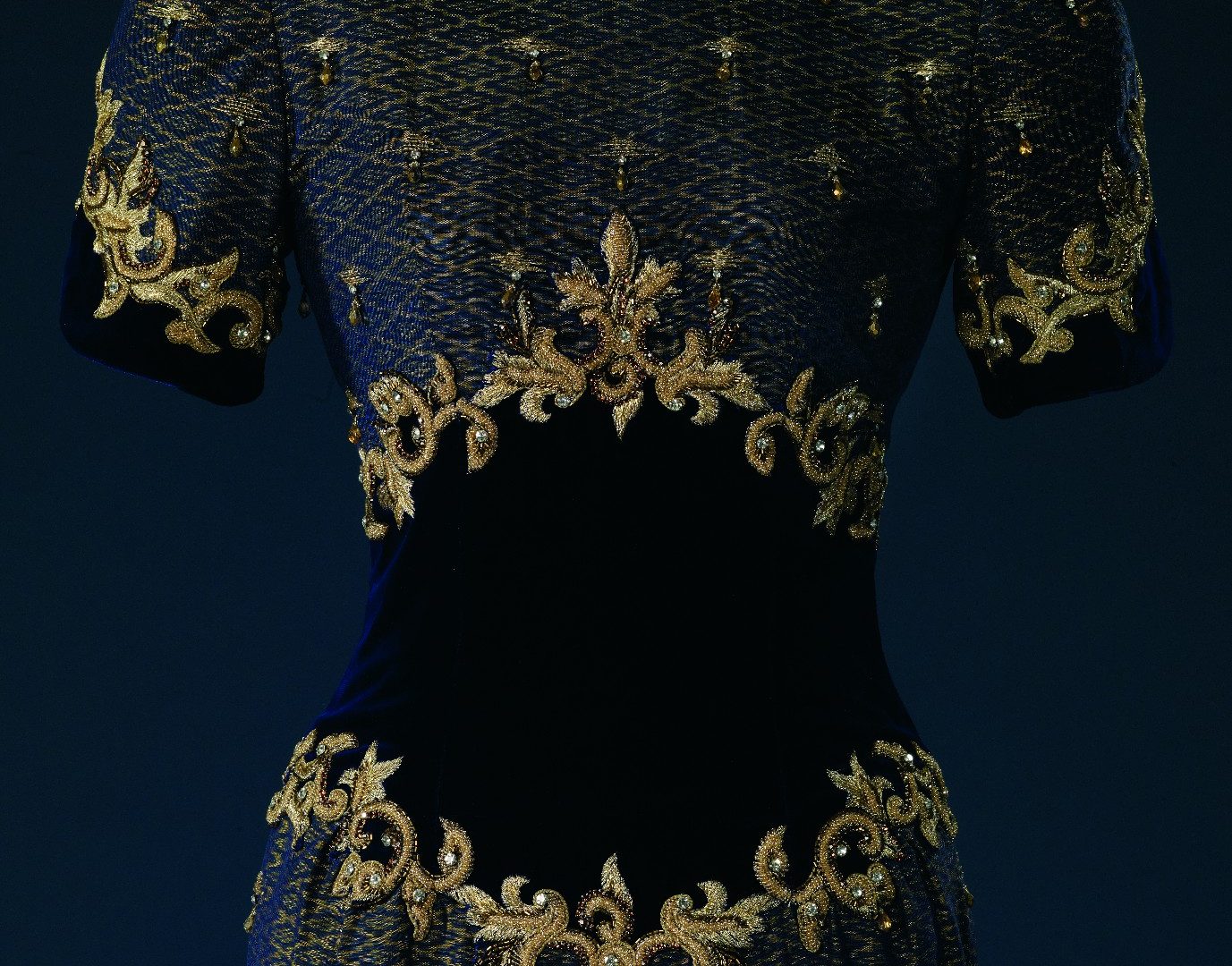 Picture 1: H.M. Queen Sirikit’s Evening Ensemble designed by Erik Mortensen for House of Balmain, where Her Majesty wore it to a Balmain fashion show in Bangkok in 1985. The dress was created from SUPPORT ikat (Mat Mii) silks. 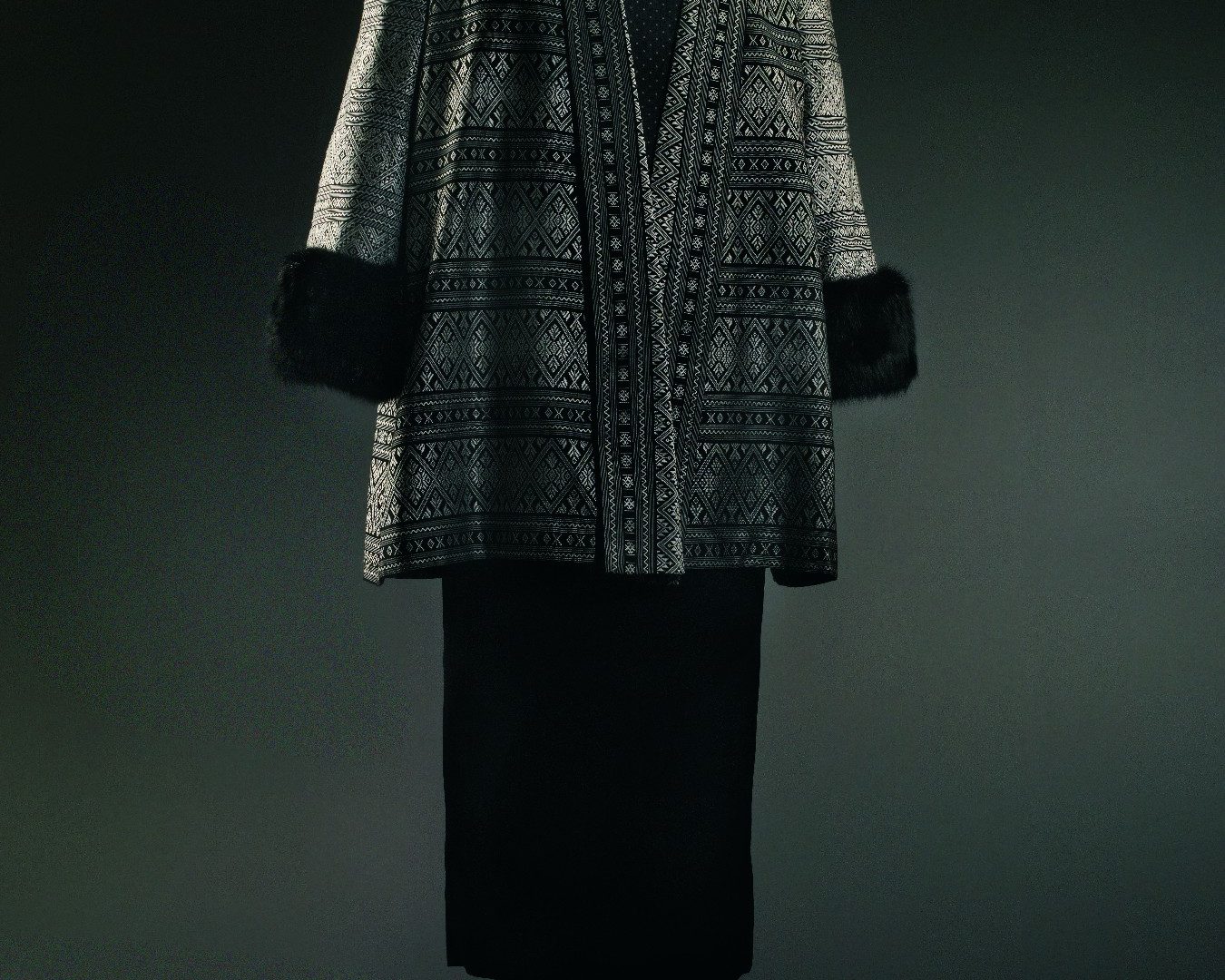 Picture 2: H.M. Queen Sirikit’s Day Ensemble (Jacket and Blouse) designed by Erik Mortensen for House of Jean-Louis Scherrer, where Her Majesty wore the ensemble at the opening of SUPPORT exhibition at the Eiffel Tower commemorating the Golden Jubilee of H.M. the late King Bhumibol Adulyadej the Great in 1997. 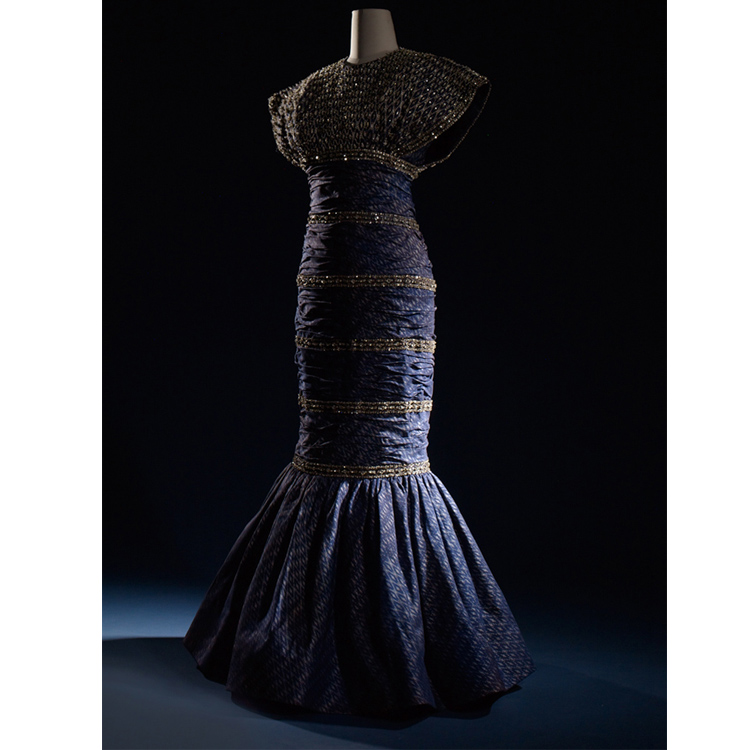 Picture 3: H.M. Queen Sirikit’s Evening Ensemble designed by Erik Mortensen for House of Balmain. Her Majesty commissioned the House of Balmain to create daytime and evening ensembles from a variety of SUPPORT textiles for her three-week promotional visit to the United States in 1985. She wore a floor-length gown to a formal dinner promoting SUPPORT held at the Sheraton Grand Hotel in Los Angeles. Picture 4: The brown Thai Boromphiman dress worn at the Birthday Anniversary of H.M. the late King Bhumibol Adulyadej the Great in 1989. 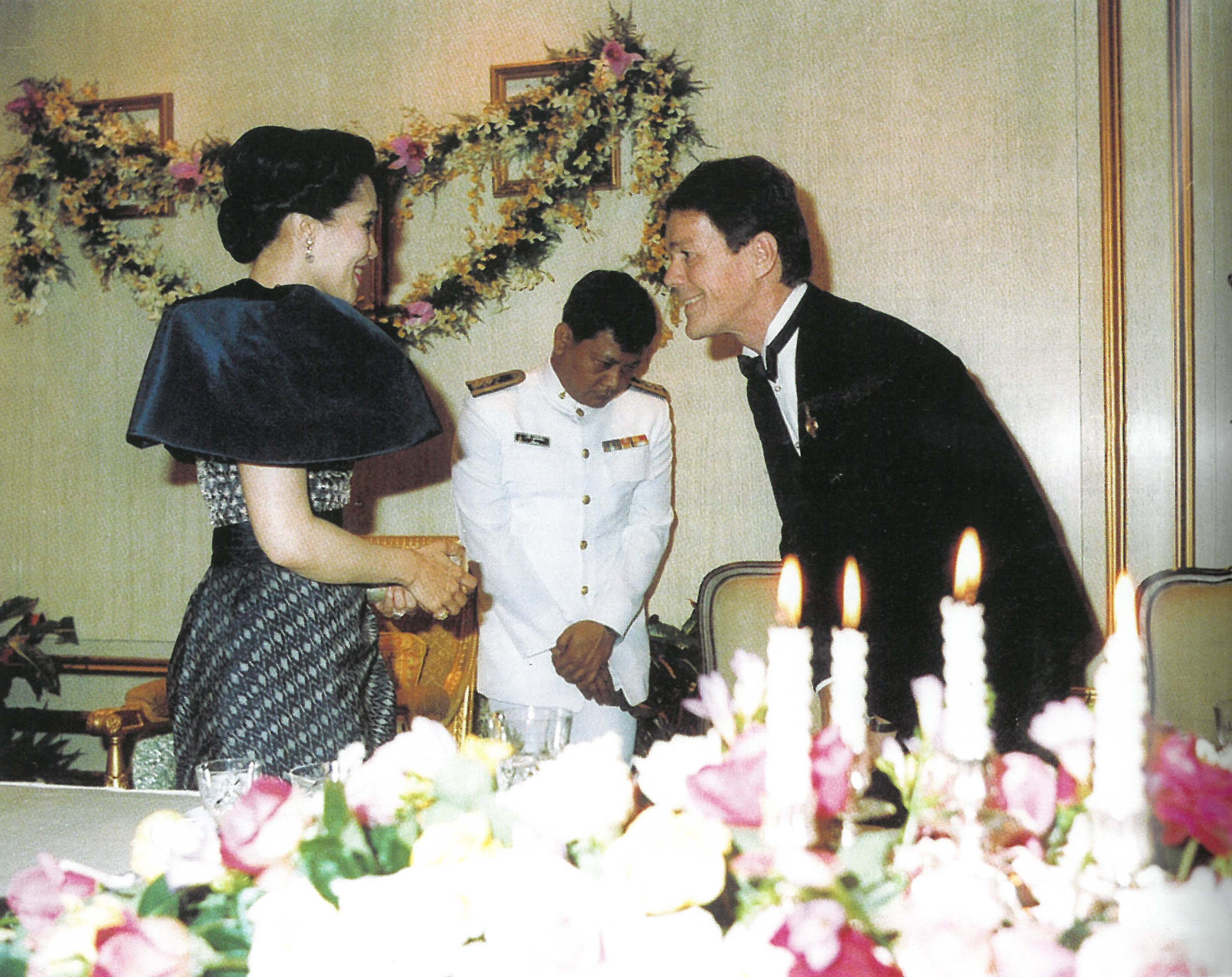 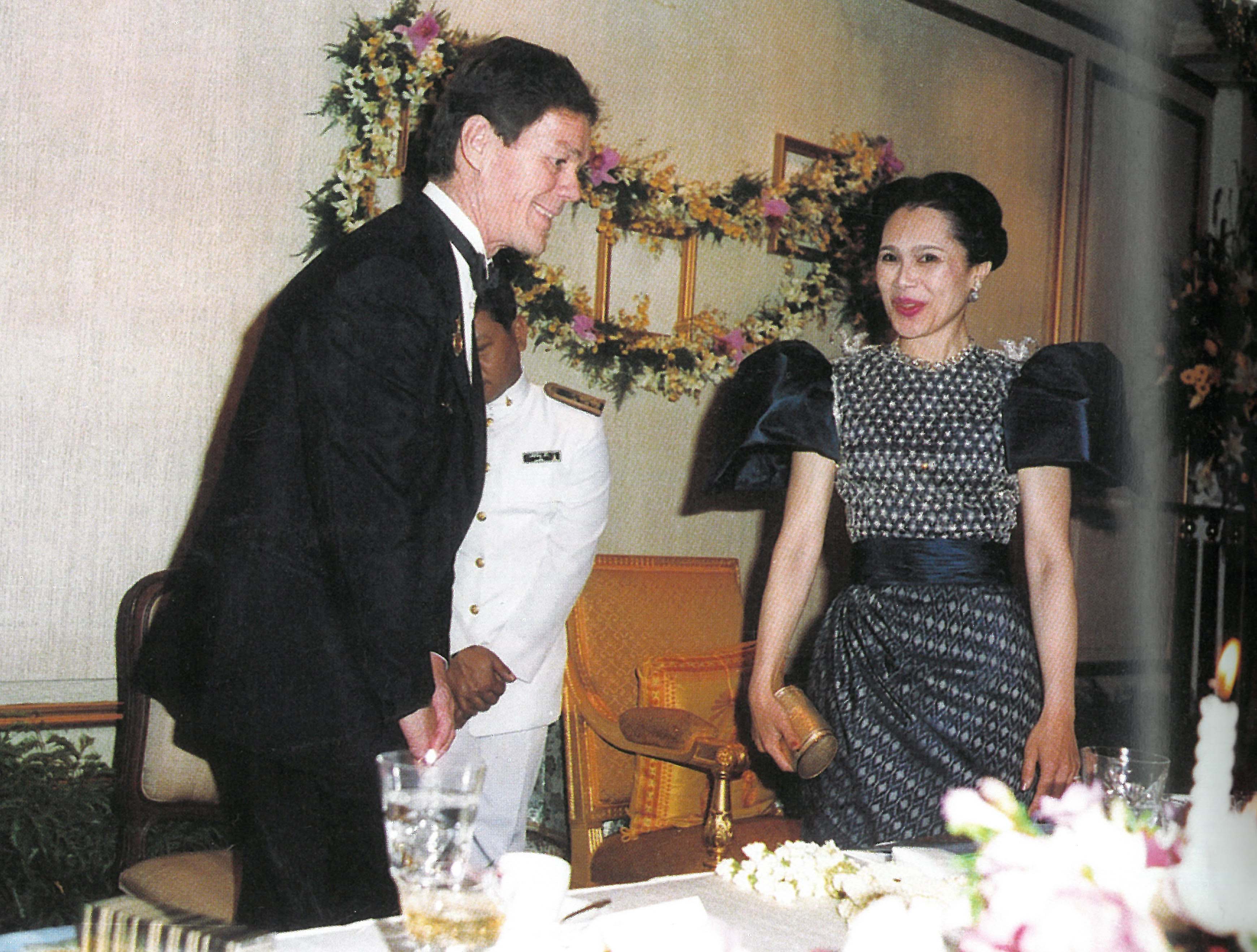 Pictures 5-6: Erik Mortensen and H.M. Queen Sirikit of Thailand at a gala dinner at the palace in Bangkok. Her Majesty wore a dress created by Balmain.