Thai food is internationally famous. Whether chilli-hot or comparatively blands, harmony is the guiding principle behind each dish. Thai cuisine is essentially a marriage of centuries-old Eastern and Western influences harmoniously combined into something uniquely Thai. The characteristics of Thai food. 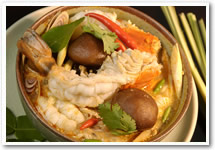 Depend on who cooks it, for whom it is cooked, for what occasion, and where it is cooked to suit all palates. Originally, Thai cooking reflected the characteristics of a waterborne lifestyle. Aquatic animals, plants and herbs were major ingredients. Large chunks of meat were eschewed. Subsequent influences introduced the use of sizeable chunks to Thai cooking.

With their Buddhist background, Thais shunned the use of large animals in big chunks. Big cuts of meat were shredded and laced with herbs and spices. Traditional Thai cooking methods were stewing and baking, or grilling. Chinese influences saw the introduction of frying, stir frying and deep-frying. Culinary influences from the 17th century onwards included Portuguese, Dutch, French and Japanese. Chillies were introduced to Thai cooking during the late 1600s by Portuguese missionaries who had acquired a taste for them while serving in South America. 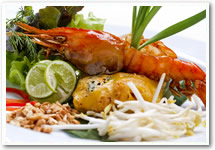 Thais were very adapt at 'Siamese-icing' foreign cooking methods, and substituting ingredients. The ghee used in Indian cooking was replaced by coconut oil, and coconut milk substituted for other daily products. Overpowering pure spices were toned down and enhanced by fresh herbs such as lemon grass and galanga. Eventually, fewer and less spices were used in Thai curries, while the use of fresh herbs increased. It is generally acknowledged that Thai curries burn intensely, but briefly, whereas other curries, with strong spices, burn for longer periods. Instead of serving dishes in courses, a Thai meal is served all at once, permitting dinners to enjoy complementary combinations of different tastes.

A proper Thai meal should consist of a soup, a curry dish with condiments, a dip with accompanying fish and vegetables. A spiced salad may replace the curry dish. The soup can also be spicy, but the curry should be replaced by non spiced items. There must be a harmony of tastes and textures within individual dishes and the entire meal.

Thai food is eaten with a fork and spoon. Even single dish meals such as fried rice with pork, or steamed rice topped with roasted duck, are served in bite-sized slices or chunks obviating the need for a knife. The spoon is used to convey food to the mouth. Ideally, eating Thai food is a communal affair involving two or more people, principally because the greater the number of diners the greater the number of dishes ordered. Generally speaking, two diners order three dishes in addition to their own individual plates of steamed rice. Three diners four dishes, and so on. 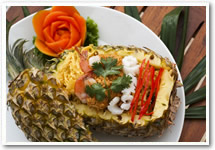 The ideal Thai meal is a harmonious blend of the spicy, the subtle, the sweet and sour, and is meant to be equally satisfying to eye, nose and palate. A typical meal might include a clear soup (perhaps bitter melons stuffed with minced pork), a steamed dish (mussels in curry sauce), a fried dish (fish with ginger), a hot salad (beef slices on a bed of lettuce, onions, chillies, mint and lemon juice) and a variety of sauces into which food is dipped. This would be followed by sweet desserts or fresh fruits such as mangoes, durian, jackfruit, papaya, grapes or melon.

What Comprises a Thai Meal